A Rainbow of Edible Mushrooms

With the bright lights of Christmas beckoning here are a few insights into the multi hued world of edible fungi.

People coming on our courses will often say that a brightly coloured mushroom must be a poisonous one, or that nature makes things red to tell us it’s not edible. To lay that misnomer to rest here is a list of some of our favourite edible fungi that will take us through the colours of the rainbow. 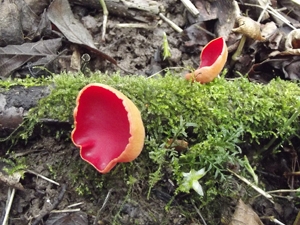 The Scarlet Elfcup. As bright as Santa’s outfit, this one’s a winter stunner. It hides away in the untidy spots growing on sticks and twigs that have been buried in soil or organic debris. The mycelium digests a stick until it senses a drop in temperatures indicating winter has arrived. It then sends up a stem, that when it reaches the surface opens out into a fantastic pillar box red flattened cup. This is usually between 1cm and 8cm in diameter. Despite their bright colour they are often hard to spot as they tend to be tucked away in piles of sticks or deep in bramble patches. However when you see one Scarlet Elfcup you usually see many more in  the same spot. They make excellent eating with a great mushroom flavour, retaining their meaty texture during cooking. We see these on many of our early spring walks cooking them where we find enough. Beefsteak Fungus is another easy to ID red edible with deep red flesh that bleeds a thin red liquid, resembling raw meat. 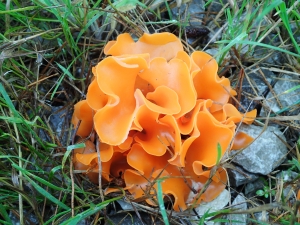 Orange Peel Fungus. This one is most often confused for ….. orange peel, and the colour is not a sign to use caution. A quick glimpse at a few metres might have you trotting over to remove the litter, but a closer inspection will reveal a thin, often ruffled, sheet of bright orange. This is Orange Peel Fungus, like the Scarlet Elfcup it is a member of the cup or Pezizales order. Seen in the autumn it likes the edges of paths, be it soil or gravel and is often found in abundance. Not quite as tasty or as good a texture as the Scarlet Elfcup but easy to clean. 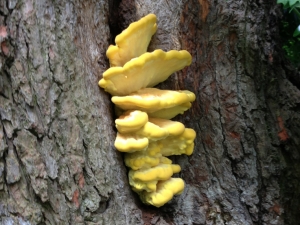 Chicken of the Woods, or Laetiporus sulphureus. As its scientific name suggests it is a bright yellow, this time on its underside, which is good for us as its usually to be found 1.5m or more up a tree trunk. Unlike the bright yellow we see in the stems of the 3 poisonous members of the Agaricus family, this yellow is on a highly prized mushroom. The common name is referring to the cooked chicken like texture and  flavour of this bracket fungus. Often found in large amounts if not cooked on the day, it keeps well, and freezes perfectly (after a quick frying or sautéing to kill any bacteria). Used anywhere you might use chicken it is a most welcome bright yellow fungus (a few people have a gastric reaction to this one so have a small portion the first time you eat it). 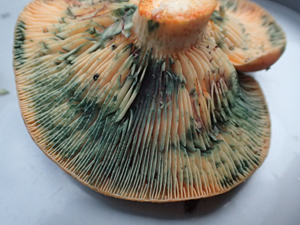 Green bruising on Saffron Milkcaps. This is a mushroom that despite its scientific name, Lactarius deliciosus, often has people recoiling in surprise at an orange mushroom covered in apparently mouldy green blotches. This orange and green combination actually helps us identify a gourmet mushroom highly prized throughout Europe. The Saffron Milkcap is always found in association with pines meaning plantations can be a good place to forage for this mushroom. The orange concentric circles on the cap, the orange gills, the carrot coloured milk appearing at any site of damage when fresh and then the copper green bruising make it an easy mushroom to identify. It does have an almost identical twin, the False Saffron Milkcap, whose stem lacks the orange pits of its relative but it is a just as tasty edible. 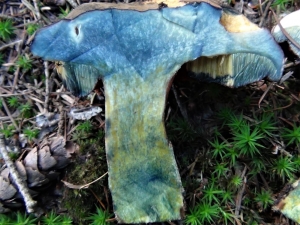 There aren’t many mushrooms that are blue on the outside, the poisonous Blue Roundhead and the Verdegris Agaric being the two in the UK. However blue staining on the inside is much more common, especially in the Bolete group. On our courses we have a simple rule that we avoid boletes with red on the outside or blue on the inside. This is simple and safe, ruling out the poisonous members of the group. With more experience there are some edible blue staining Boletes that you can identify and eat. One of the best is the Scarletina Bolete, with red dots on its stem and when cut open stains almost immediately, an intense deep blue. This is very dramatic and is always a big hit on our courses. What is happening is variegatic and xerocomic acids in the flesh are being oxidised by the air in the presence of catalytic enzymes – some serious but fun science.

Indigo Milkcap – Ok, so this isn’t a UK mushroom but it is most definitely indigo and a sought after delicacy in China and south America, especially Mexico. It has all the hallmarks of a Milkcap, concentric circles on the cap, brittle stem and gills, and an oozing sap or latex when damaged. But this one is indigo, pale in the gills but bright in the sap. At 5-15cm in diameter and 2.5cm thick it is a big Milkcap, big enough for a meal on its own and often sold in the local markets. 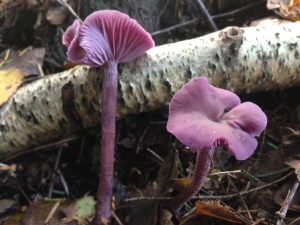 Amethyst Deceiver/Wood Blewit/Field Blewit. We are spoilt for choice with violet or purple. With three excellent mushrooms, 2 of which we recommend to beginners. Amethyst deceivers are one of the smallest fungi we recommend foraging for, but a really popular one when we find it on courses. The purple cap, purple gills and twisty purple stem make it an easy mushroom to identify in the woods and it usually occurs in good numbers to make up for its diminutive size. The two Blewits look quite similar to each other, but the Wood Blewit is violet all over and found in woods, and the Field Blewit has a brown cap and gills with a violet stem and is found in grass.

So that’s it, a rainbow of edible mushrooms, so don’t believe bright colours are bad, they are in fact very useful for foragers and great fun.