Too many mushrooms, can there really be too many mushrooms? Mushrooms are best fresh but sometimes you do come home with a bag full and despite having fried egg and mushrooms for breakfast, mushroom pate for lunch and mushroom pie for dinner you can’t eat them all before they spoil. So what to do? Not let them spoil, that’s the first answer, if you can’t use them, you really shouldn’t be picking them, but we all like to enjoy mushrooms throughout the year so how to keep some for another time? Do what our ancestors have done for millennia, and preserve the surplus. In the UK we still have a lot of the skills associated with preserving, but we don’t often apply them to mushrooms, so here is a quick guide to the different techniques that can be used.

To start off all mushrooms can be stored using some method, some methods work better for certain mushrooms, some better for others. Whatever technique you use, make sure the mushrooms are clean and in good condition before you start preparations, don’t try to preserve mouldy mushrooms!

In the modern world this is one method we are all used to, we buy many foodstuffs already frozen, freeze meals we have cooked, but unless we grow our own food we may not have frozen fresh produce. The big issue here is ensuring what we freeze is sterile, i.e free from living bacteria, viruses, or moulds (more fungi!). Even when frozen these can cause issues when the food is thawed out. To be sterilised we need to raise the temperature above 80c throughout the food, in this case mushrooms. We can do this by flash frying or blanching. For frying slice the mushrooms as you would normally but thin enough to ensure they cook all the way through, then fry them till barely cooked. Don’t add garlic as this doesn’t taste so good after freezing. Once the mushrooms are cooked put them straight into labelled freezer bags, seal the bags (tie or ziplock), wait for them to cool sufficiently and put them in the freezer. 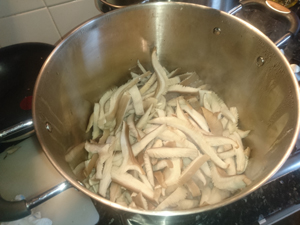 For boiling, clean and slice the mushrooms, put them into boiling water for 5 minutes, then take them out and put them straight into a pan full of pre-prepared cold water (ice packs can help). This gets the temperature down quickly so you can bag them and freeze them as before. 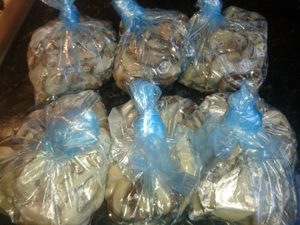 Oysters processed and sealed in bags for freezing

As freezer space is at a premium I tend to only freeze mushrooms that don’t work so well dried. Oysters is a big one as these tend to end up tough if you dry them. Oysters also tend to come in a rush and so the boiling method, although you loose a little of the flavour, is best at dealing with large volumes – frying 1.5kg of mushrooms is slow going.

Drying is probably the oldest form of storage for mushrooms. The reduction in size with some, especially the boletes intensifies the flavours, although others such as the fairy ring champignon will rehydrate almost perfectly.

The most important thing with drying is to get the mushrooms so dry that they snap like a crisp. To do this they must be sliced thinly. The exact thickness depends on the mushrooms, chunky ones like boletes will need to be as thin as 2mm, less fleshy ones such as champignon can be much thicker as the flesh isn’t thicker than 2mm in the first place. There are 3 main options for drying, air, oven, or dehydrator.

Drying on a thread

Air drying relies on a slow process of using the air in or out of our homes to reduce the moisture levels in the slices of mushrooms however in the UK outside is not often consistently dry enough, and it also exposes your haul to the attentions of the dreaded mushroom gnats and the slow process allows any critters already present to keep chomping (the ones that have survived the slicing process!). The most traditional way of air drying is by stringing up the mushroom slices on a thread. Use a needle to thread the slices onto cotton and then suspend somewhere warm but out of the way. Sounds simple but it relies on the mushrooms being tough enough to stop the thread ripping out through the flesh (and a lot of patience). If this happens consider smaller mushroom pieces or a thicker thread. How long will it take, that depends on the mushrooms being dried, the thickness of the pieces, the temperature, and the humidity. It might take as little as a day, it might take as long as a week. 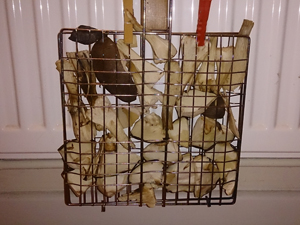 Another method of air drying would be to utilise a BBQ folding burger or fish grill. Depending on the tool this could hold slices flat and then be placed next to a radiator.

The next step up from air drying is using an oven. This has pros and cons, namely it will be quicker but you do risk toasting your mushrooms. Take your thin slices and spread them out on wire cake racks to allow the air to circulate all around the pieces. Put them in the oven set to its lowest temperature and leave the oven door slightly open. Its going to take 8 hours or more so do it at a time that suits you, think about oven usage, think about noise from a fan oven, and think about safety – having the oven door open is a risk for small children. Unfortunately what can happen is cooking, where the temperature in the oven is too high and you end up with brown toasted mushrooms that wont rehydrate, not what you want. If you have an oven thermometer then try to get a temperature of 30c to 45c. 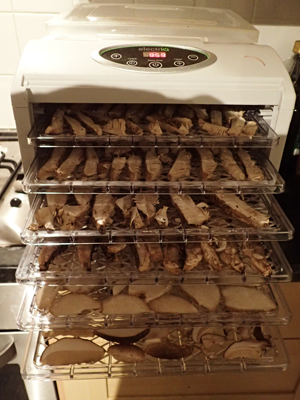 By far the best method of drying is using a purpose built dehydrator. These can be bought for as little as £30 or up into the hundreds for a commercial unit. They should all have a temperature control and timer and consist of 6 to 10 trays in box of some kind. The difference is design and materials. The commercial machines are metal and push air horizontally across trays resulting in even drying. The low end domestic machines are plastic and push air up through the trays sequentially, requiring swapping around at intervals to get all trays dry. A really good compromise is a domestic machine, made of plastic that utilises the horizontal drying method so that you can set the time and temperature and come back when the process is over. These are very effective and can process large amounts of mushrooms, using 40-45c in 8 to 10 hours, enabling you to pick and process easily overnight. 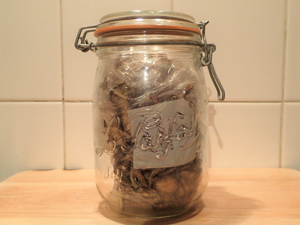 Dried and stored in ziplock bags in a clip top jar

Once dried get your mushrooms into airtight containers asap, I put mine into labelled ziplock bags, and then into sealable containers, such as jam or Kilner jars. This way I can store different varieties in one jar optimising space.

Pickling is used for many things such as eggs, walnuts and vegetables such as gherkins, but we don’t have a history of pickling mushrooms in the UK so this is often seen as unusual. However pickling mushrooms is standard practice throughout eastern Europe and the far east. Look on the shelves of the German supermarket chains such as Aldi and Lidl and you will see jars of mushrooms from around the world. Two liquids are used in the pickling process. Brine or salt water and vinegar. For brine pickling 20-40g of salt per litre are required, if vinegar is used then the pickle needs to be kept in the fridge in a sealed jar. Our pickled chanterelle recipe can be used for other mushrooms.

If you are struggling to decide what to do with your horde, maybe you have picked a bag of mushrooms midweek and you have friends over at the weekend then you can always turn it into mushroom soup or pate which will freeze perfectly. Our own WildfoodUK soup recipes, mushroom soup and mushroom pate work just fine for freezing.

So next time you are lucky enough to not be able to eat your foraged mushrooms in a day or two you now have a few options on how to store them and enjoy them through the months to come.

2 comments for Preserving your bounty