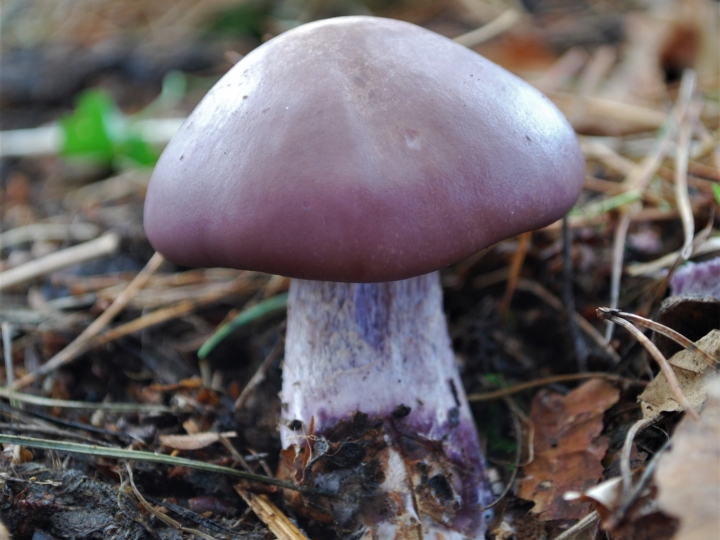 A lovely gourmet mushroom that can be found from November to February when there is not that many other mushrooms about. 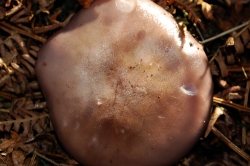 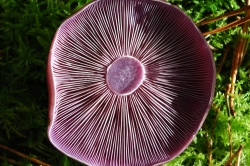 Gills Lilac, purple or blueish but can be paler especially when very mature. Crowded. 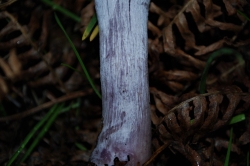 Bluey-purple and a bit fibrous, more often than not thick and stout although can be fairly thin, and can be slightly bulbous towards the base. 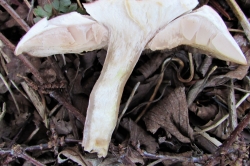 Purple, lilac or blue sometimes white towards the middle fading with age. 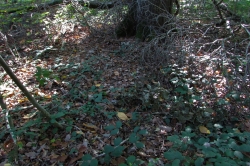 Saprobic on leaf litter in woodland, grassland, hedgerows and gardens.

Some of the Cortinarius species, especially the Bruising Webcap, pictured, as they can have similar lilac blue colouring but generally have an unpleasant smell and the spore print is rusty brown. The stem will usually have band of orange/brown due to the spores sticking to the residue of the cortina or there will be some of the cortina left hanging from the edge of the cap looking a little like cobweb.
Lepista sordida looks almost identical to a Wood Blewit but is smaller and generally thinner fleshed. This is not a problem as both mushrooms taste the same and both are edible. 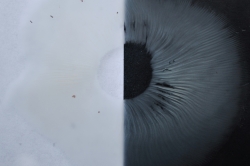 Off-white to pale pink. Ellipsoid. The spores should be scrapped into a small pile to get an accurate spore colour.

Mushroomy and strong, slightly perfumey with a solid, meaty texture when fairly dry but they can hold a lot of water. Can be used for most dishes and drys very well. Must be cooked before consumption.

Must be cooked before consumption.
The Blewits like the cold and only start to appear when the temperature is constantly below 17 degrees and quite easily survive a frost.