What are they, what causes them, and where to find them?

The gardener’s foe and the forager’s friend, a circle of mushrooms sometimes in grass and sometimes around a tree, the fairy ring has been the subject of myth and legend over the millennia. In British Isles folklore the fairy rings are often seen as sites where fairies danced the night away, dining from the caps of mushrooms. 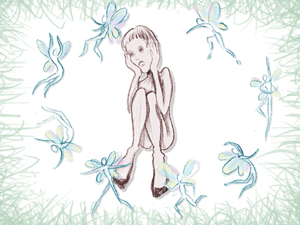 Sometimes the mischievous mystic folk would entice innocents into the rings to put them under their spell. Once in the ring the unfortunate soul would become invisible to the outside world and unable to leave the circle, unless rescued by folks casting thyme or marjoram into the circle, or using iron to touch the trapped person. Even when rescued the victim may face an untimely death, crumbling to dust or mouldering away when they eat their first food.

Many local variations exist on the fairy ring myths. On Dartmoor there is a rock allegedly surrounded by a fairy ring called the Pixies Church, another legend from Dartmoor tells of black chickens appearing in a ring at dusk. These legends come from across the world and back in time. In the 2nd 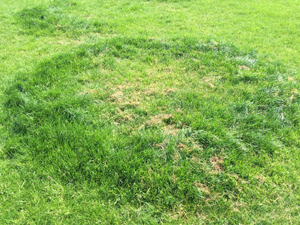 century AD the Greeks wrote of fairy rings in the tale of Eros and there were reports of people claiming to have seen fairies dancing in rings right up to the 1960s.

Good or bad what is actually happening in these mysterious circles? Often the first thing people notice is the sudden appearance of a circle of mushrooms, be it in their lawn, pasture or in woodland. This is the fruiting phase of the fungi that is lying under the soil. These rings start when one of the thousands and sometimes millions of spores released from a mushroom lands in a favourable spot with sufficient nutrients and water to allow it to grow, and in many cases the correct host plant. The spore produces thin strands called hyphae that spread out 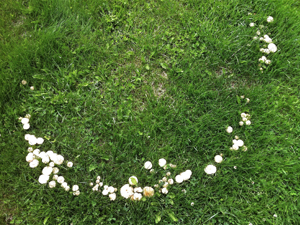 through the soil absorbing water and nutrients and building the body of the fungus, the mycelium.

Where the fairy ring is in grass it often shows before the mushrooms appear as darker, lighter, longer or shorter grass depending on the relationship between the fungi and the grass. It need not even be a circle, ovals, figures of eight and arcs are also common and can occur where two rings have met or there is some barrier to growth, be it physical or maybe a lack of food. These rings are called free as they can grow in any direction and are commonly a few metres or even a few tens of metres in diameter, but some in France have been measured at 600m (trooping funnels)! 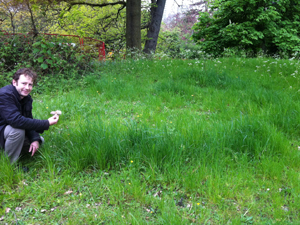 The relationship with the grass can be very complicated. Some fungi deplete the soil of nutrients, especially nitrogen, causing the grass above to be stressed and shorter or discoloured. If at the time of fruiting the mycelial mat becomes too dense above the grass roots then this can lead to the death of the grass around the mushrooms. Other fungi release hormone like chemicals called gibberellins. These encourage longer, thicker and often darker green growth. As the hyphae extract the nutrients the soil cannot then support the mycelium and so it can die in the centre. In some cases the slow accumulation of rabbit droppings can add some of those lost nutrients back and allow growth of the mycelium to restart, leading to a double ring. 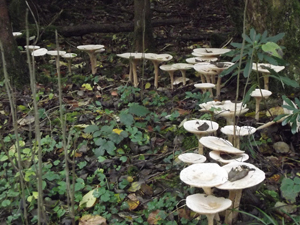 In woodland we see rings of mushrooms associated with trees, these are known as fixed or tethered, the result of mycorrhizal fungi who have a direct and often symbiotic relationship with a living tree and so cannot leave the tree’s root system. If they are not fruiting they can only be seen by lifting up some of the leaf litter on top of the mycelium. Common woodland ring species are Clouded Agarics, Fly Agarics, and Giant Funnels.

A frequent question is how fast do they grow? The research on this has been haphazard over the years and it is very dependent on conditions and species, but between 8cm and 30cm a year. The 600m ring of trooping funnels mentioned above in France is estimated to be 700 years old and some St Georges rings on the South Downs are over 60m in diameter and 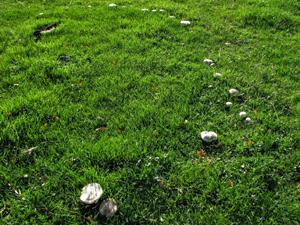 potentially hundreds of years old. Other common rings found in grass are The Field Mushroom which tends to make rings of a few metres, and the Fairy Ring Champignon which are usually larger.

So how does all this help us as foragers? Seeing a ring in the grass is a good sign, but unfortunately there is no sure fire way to tell what sort of fungi it is until it fruits. There are some 60 or so fungi known to form rings, including some of our most sought after species, the Fairy Ring Champignon, Field Mushroom, Horse Mushroom, Giant Puffball, and the Blewits. Unfortunately some of the most deadly mushrooms also form fairy rings including the Death Cap, Fools Funnel and Ivory Funnel. So keep an eye on those rings in the grass and hope they bring forth good edible mushrooms.