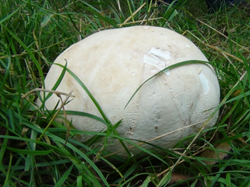 Puffballs are a great family of mushrooms for novice foragers to pick from, for a number of reasons…

The safest of all UK mushrooms to identify, is also the best tasting in the Puffball family; the Giant Puffball, Calvatia gigantia. It has no look-a-likes when mature, and will provide a decent sized meal from just one mushroom.

An average Giant Puffball can produce seven trillion spores. These spores are very fussy and the mushroom is lucky if more than 1 of them grows to 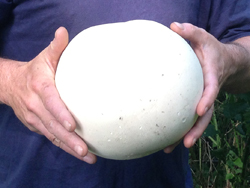 This is quite lucky for us too, as it has been calculated that if each spore from one mushroom germinated and the same happened to that generation, it would produce a mass of fungi 800 times the volume of the Earth!

In 2010, schoolboy Finley O’Neil from Yorkshire found a world record breaking Giant Puffball, measuring 66.5 inches (nearly 170 cm) in diameter. The Giant Puffball holds another record too; it produces more progeny than any other living thing.

Not all are as easy to identify as the giants though; other family members range in size from less than a marble, to bigger than a beach ball. There are roughly 18 members of the true Puffball family in the UK. 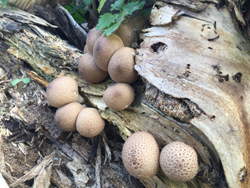 To ensure that you have an edible Puffball, follow these simple rules:

First find a mushroom without gills, spines or pores under the non existent cap! Basically, find a mushroom that either looks like a ball or a ball with an elongated stem. Pictured right are young Stump Puffballs.

For further identification purposes, the ball-like mushroom you have found must be cut in half.

Inside, the mushroom should be pure white with a spongy flesh and nothing else. Young fresh edible Puffballs have white spongy flesh all the way through the mushroom. See the Common Puffball sliced through below right. 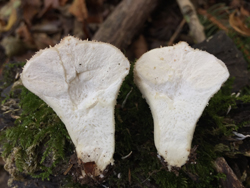 As the mushroom matures, the flesh inside will begin to turn yellow. This is now no longer edible and can make people sick.
There are a few nasty look-a-likes, which is why cutting the mushroom in half is an important key to identifying which Puffball you have found.

If there is anything else apart from white sponge inside your mushroom, it is NOT an edible puffball. 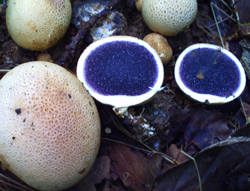 The Earthballs
These mushrooms fool many people and account for the second most mushroom poisonings in the UK each year. They are not deadly, but can make you very ill.

Earthballs are easily identified though, as they have a tough warted skin, giving them their other common name ‘The Poison Pigskin Puffball’.

They are also more solid to the touch and less spongy throughout. If cut in half, almost all Earthballs are purple or black in the middle; this should put most people off eating them!

But beware, as some species of Earthball can remain white in the middle; though they are still much firmer to the touch and without the spongy effect inside. The skin will still be tough and warty.

Remember; if you are at all unsure of what you have found, follow the rule and do not eat it! 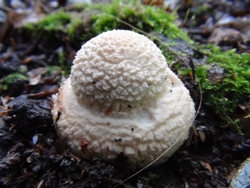 Some members of the Aminita family are Deadly. This family of mushrooms grow from a white ‘egg sack’, which can look very much like a puffball, as shown in the picture on the right.

If cut in half, this egg sack would reveal a small mushroom ready to burst through the egg skin and start growing.

Do not eat an Amanita Egg! Only some Amanitas are edible and these can only be identified when they are beyond the egg stage.

Some Amanitas, including the Death Cap and the Destroying Angel are deadly poisonous with no known cure. 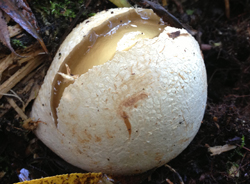 This mushroom also grows from an egg, but it is easily identified by the gelatinous layer between the immature mushroom inside and the skin of the egg.

Some parts of the Stinkhorn are actually edible, if a little smelly! But if you are going to try this, you must to be 100% certain that you do not have an Amanita instead!

If you slice a Stinkhorn through, it will be pretty obvious that it isn’t a mamber of the Puffball family that you’ve found.

Watch what happened when we did the taste test in our Stinkhorn YouTube video. 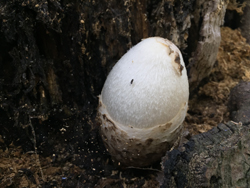 These also grow from an egg sack and although they are listed as edible, they are too similar to the Amanitas to be of any interest to a forager.

One of the prettiest of the Volvariella family is the delicate Silky Rosegill (Volvariella bombycina).

We were lucky enough to spot one of these rare fungi, watch our Silky Rosegill YouTube video. 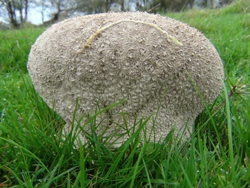 We use the large Mozaic Puffballs (pictured right) and even larger Giant Puffballs to make our Puffball schnitzels. This simple method is the best way we have found of cooking them.

These mushrooms have a lovely flavour, but when fried in large slices they do tend to end up with a rather floppy texture. Coating them with breadcrumbs before frying helps to firm them up a little. 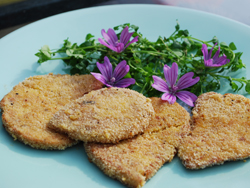 The smaller Puffballs generally have less flavour than the larger ones, but can still be used to create some tasty meals. Their spongy composition enables them to soak up a marinade fairly quickly, so are great for carrying flavour into your meals.
They can be used in the same way as described for the Giant Puffball schnitzels, (pictured on the right) or added to stir-fries and pasta dishes.

A bit more about Puffballs.. 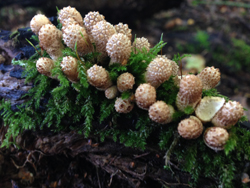 Puffballs are a ‘Decay Fungus’ and play a massively important role in the care of our environment. Along with the likes of Oyster Mushrooms and Honey Fungus, they are one of the few living organisms that are able to breakdown and encourage decomposition of the toughest material in wood; Lignin. Without them, our planet would be covered in fallen trees and organic matter to such a depth, it would be extremely slow and difficult to continually break it all down.

If inhaled in large quantities, Puffball spores can lead to Lycoperdonitis which causes inflammation of the alveoli in the lungs. This was discovered through an old nosebleed cure; however, I don’t know if contracting Lycoperdonitis can cure nosebleeds… 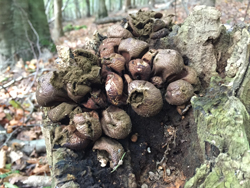 More shockingly, in 1967 eight teenagers from Wisconsin snorted Puffball spores whilst searching for a ‘high’, but ended up hospitalised for four weeks! It is reported that the spores germinated to hyphae stage in the lungs and had to be treated with a fungicide.

There have been no human fatalities associated with Puffballs, but dogs breathing in large amounts of the spores have died.

The spores have many sharp microscopic spines which can cause severe irritation of the lungs. It can be equally as bad if you get the spores in your eyes.

It’s not all bad news with the spores though, smithies used to keep Puffballs in the forge to help heal burns and as a styptic to stop bleeding. As it turns out they knew what they were doing; these spores are antibacterial, antifungal and antimicrobial, fighting Bacillus subtilis, Staphylococcus aureus, Salmonella typhimurium and  Escherichia coli (the list goes on) as effectively as the antibiotic Ampicillin!

The fungus starts white throughout but when mature the interior turns yellow to purple to brown and becomes many millions of spores called a gleba with a paper thin skin holding them together. The mushrooms are then light enough to be blown around, therefore spreading the spores.

Even one raindrop hitting the mushroom can cause the spores to shoot out of the fungi at a velocity of about 100 cm/second. This forms a centimetre tall cloud one-hundredth of a second after impact. A single puff like this can release over a million spores in the Common Puffball, the spores being typically 3.5 to 4 microns in size. 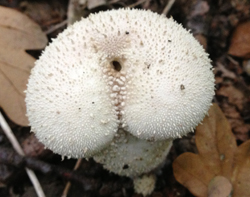 The scientific name for most of the Puffball family is Lycoperdon, which translates as Wolf Farts, with Lyco meaning wolf and perdon, burst of wind…

Puffballs are placed within the Basidiomycota group of fungus, meaning the spores are on the inside. Its old name Gastromycete, means ‘stomach fungi’.

Oh, and sometimes they can grow in some amusing shapes!…

27 comments for The Puffballs