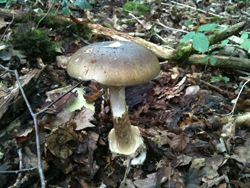 The Amanita family is certainly one of the most interesting for foragers, and definitely one we recommend the novice forager to familiarise themselves with.

The Amanita family contains roughly 24 species throughout the British Isles and some of these are amongst the most deadly poisonous mushrooms in the world.

Of the 24, at least 5 are listed as deadly among the books I own. These are The Death Cap, The Destroying Angel, The Gemmed Amanita, The Panther Cap and the rare Spring Amanita.
Not all of the above are pictured in this article. 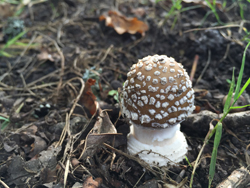 Some Amanitas are edible, but we don’t consider them safe for the novice forager. One of the most important things for any mushroom enthusiast to learn, is how to recognise the Amanita family; and in particular, the edible mushrooms that they could be confused with.

Before even considering eating any of the edible members of this family, or picking any mushroom that can look similar to them, it is worth noting that there is no known cure for the combination of toxins found in some Amanitas.

A slow death is likely if you ingest these mushrooms, accompanied by extreme gastric problems and terrible pain as they destroy your internal organs…

Below are a few key characteristics that most Amanitas share: 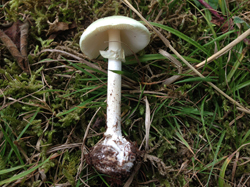 1, All have white gills, white spores and grow from a bag (volva). When identifying mushrooms that you aren’t familiar with, it’s important to get to the very base of the stem (or stipe) and make a note of what you find; this bulbous base is a key identifier for the Amanitas. This can often be buried under the forest detritus, or lodged well in the ground.

2, Most have a skirt which can either be smooth or striated. Look closely at the characteristics of each skirt when you begin to learn about the individual species within this family. The Grisettes, a sub species of the Amanitas generally do not have skirts. Be aware that the skirt on a mushroom can easily be knocked or worn off, even before you have handled it. 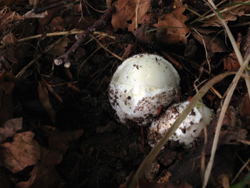 Death Caps emerging from their ‘Eggs’

3, The egg sack like structure (volva) from which the Amanita emerges from, can closely resemble other young mushrooms such as Puffballs, Agarics (Field mushroom types) or even Stinkhorn eggs. Therefore, this characteristic is important to consider when harvesting any of those edible mushrooms.

4, The remains of the volva can often be seen stuck to the cap of the mushroom, although these remnants can be missing if rubbed or washed off by the rain. It can be easier to spot this residue on the Gemmed Amanita and the False Death Cap.  Some are scales left behind from when the mushroom broke through its egg and some are much more like a calcite build-up on top of the cap. The Fly Agaric is a great example as its speckles look like warts! Some of the most deadly members of the family have no speckles at all. 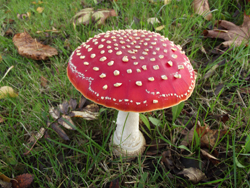 Each Fly Agaric mushroom has an unknown quantity of the poison muscarine in it, which can have fatal effects.

Mushrooms that can be confused with Amanitas:

Puffballs; small white puffballs can resemble Amanita eggs. Always cut your puffballs in half and make sure there isn’t a little mushroom inside to be sure you don’t have an Amanita. 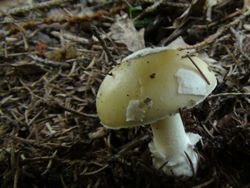 Russulas; the Gemmed Amanita can look like the Common Yellow Russula if all of the speckles have been washed off the top. Check the shape and texture of the stem. The Russula stem will be straight and white like a stick of chalk and have no skirt. The Amanita stem will be bulbous at the base and probably have a skirt.

Parasols; there are a number of superficial similarities between the Parasol and the Amanita family. Check the cap of your Parasol to make sure it actually has true scales,  rather than having scale-like deposits that you can brush off.  Also check the skirt on the stem as this can be moved up and down on Parasols. 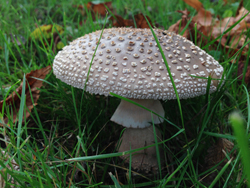 As I have mentioned before, there are deadly poisonous members of this family and some are edible. The article below details how to identify one edible member of this family. You use the content of this article at your own risk though!