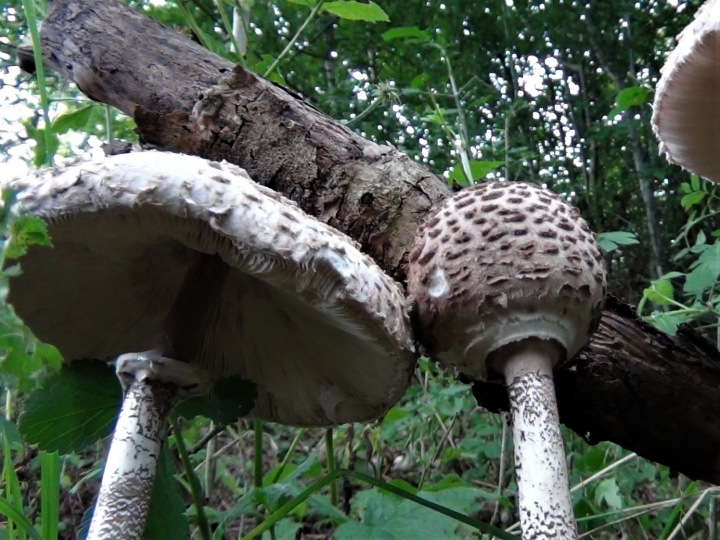 A great tasting, easy to identify mushroom that is large enough to spot from afar. 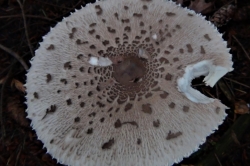 Tan. Round and bulbous when young even when the mushroom is up to 20 cm high. Opening into a large flat parasol up to 30 cm across, maturing scaly almost in rings as the skin stretches and cracks through growth. 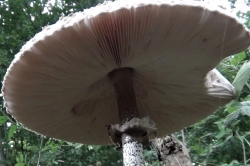 Gills white to cream, free and quite crowded. 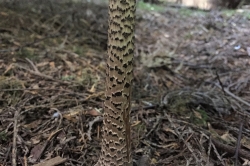 White/off white/cream, often very slightly mottled grey to brown with a kind of snakeskin effect. Coming from a bulb a little like the amanitas, strong and up to 30 cm almost always with the skirt still on nearly 2/3 of the way up the stem. Hollow on cutting and often very fibrous. 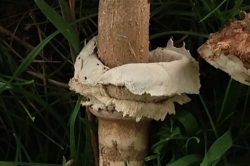 The thick, double skirt is not attached very well and can usually be moved up and down the stem. 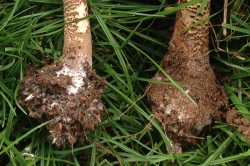 Has a bulbous base a little like members of the Amanita family but it is not a volva. 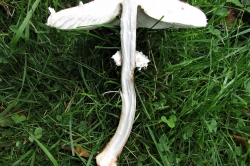 Thin soft and white in the cap, slightly spongy texture. 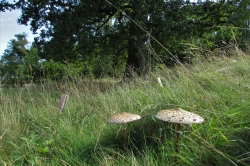 Open woods and pastures, often among ferns, on verges between roads and woods or fields. 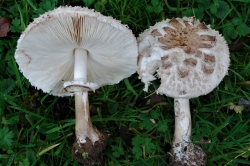 When young this mushroom looks very similar to some of the deadly amanitas, due to the fact it emerges from a sack-like structure and can have a similar looking cap. The confusion with other lepiotas which are smaller can be ignored if the mushroom cap is over twelve centimetres in diametre, when mature nothing that looks similar is anywhere near as big apart from the Shaggy Parasol, Lepiota rhacodes, pictured. The shaggy does not grow quite as large and is slightly off-white to dusty in colour, the stem has no snakeskin effect and the flesh stains red when cut. We think it’s just as tasty but it can cause mild gastric upsets in a small number of people.

Excellent, fried, dried, sauteed, in stews, or anywhere you are likely to use a mushroom. One of our favourites. Should be cooked before consumption.

Parasols can be found alone but generally they are found in rings or sometimes troops. As stated above, nothing else really gets this big apart from Shaggy Parasols. You can often spot them from quite a distance along the edges of fields, woods and roads.
Parasols are generally whiter than their cousins the Shaggy Parasols, but the Shaggys do have a white variant, so apart from the fact Parasols get marginally bigger than shaggys, the way to tell the difference is that the stem of the shaggy parasol will blush reddish when bruised or cut and never has the snakeskin effect of the true Parasol.
The Parasol is the better of the two mushrooms to cook with as there are some who suffer slight gastic abnormalities after eating Shaggy Parasols.
Parasols have a great mushroomy flavour, but but don’t be fooled by their starting size as they shrink a lot during cooking.

Identifying Lepiotas
View all our articles