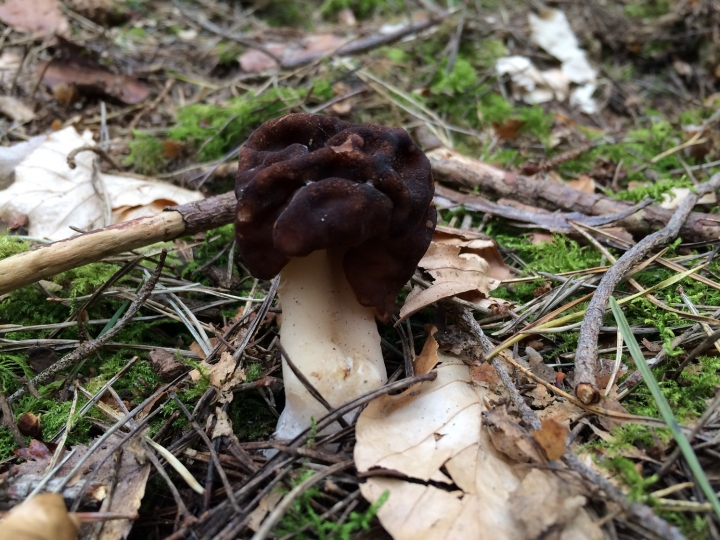 The False Morel is a Spring mushroom that contains the toxin gyromitrin. Raw or simply cooked it can be very toxic, even deadly when enough is consumed. Compare the cap to distinguish it from true Morels. 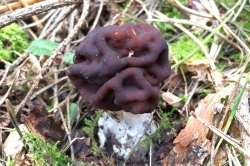 Irregularly lobed and convoluted, often compared to the shape of a brain.
The cap joins the stem at different points, forming several hollow chambers inside.
Ranges in colour from orange-brown to dark brown. 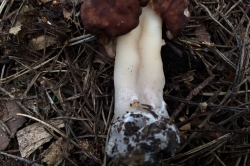 White, often short, furrowed specially towards the base.
The inside consisting of hollow chambers. 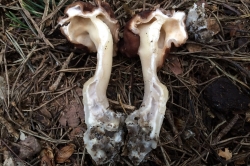 The mushroom is mostly hollow.
The flesh is brittle and pale white to cream coloured, sometimes yellowish in the cap.
It has a strong and pleasant smell. 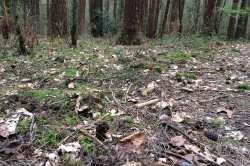 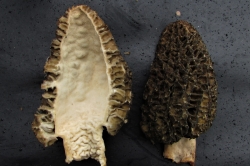 True Morels like the Black Morel (photo on the left), the Common Morel (Morchella vulgaris) or the Yellow Morel (Morchella esculenta) have often been confused.
But true Morels have fully hollow caps covered in pits and ridges that form a honeycomb structure. In contrast the False Morel has an irregular convoluted cap with several hollow chambers inside.

The Thimble Morel (Verpa conica) is a slender mushroom with a cap hanging on top of the stem. The cap has less pronounced wrinkles in contrast with the deep lobes of the False Morel.

Other species of Gyromitra exist in Europe but they are rarely recorded in the UK.

Slightly sweet. Poisonous when raw, do not swallow.

In the digestive system the gyromitrin is hydrolyzed into Monomethylhydrazine (MMH), a chemical better known for its use as a rocket propellant. The poisoning caused by MMH has a range of gastrointestinal and neurological symptoms. Serious cases lead to liver and kidney damage as well as seizures and coma, sometimes resulting in death.

The amount of gyromitrin varies a lot from collection to collection but it’s usually very high. Consumed raw or in large amounts it can be fatal. However this mushroom and related species have a long history of consumption in parts of Europe and North America.
Gyromitrin is volatile and soluble in water and it’s possible to remove most of it following a rigorous method. The processing should be done outdoors or on a well ventilated space to avoid inhaling the highly toxic vapours. We don’t recommend trying unless you understand very well the caveats associated with this species and toxin.

There are many species of Gyromitra spread across the World, some more distinct than others. A couple of these contain high amounts of gyromitrin, others only contain trace amounts and some may not even contain the toxin. This leads to much confusion and debate among mycologists and foragers in different geographic areas. Most authors currently dismiss all Gyromitra species as suspicious, but in some areas the local species are regarded as edible after simple cooking. We use the term “False Morel” to specifically refer to Gyromitra esculenta, the most commonly recorded Gyromitra species in the UK. Enthusiasts see it as a derogatory term for this unique fungi, but this is the official common name sanctioned by the British Mycological Society.