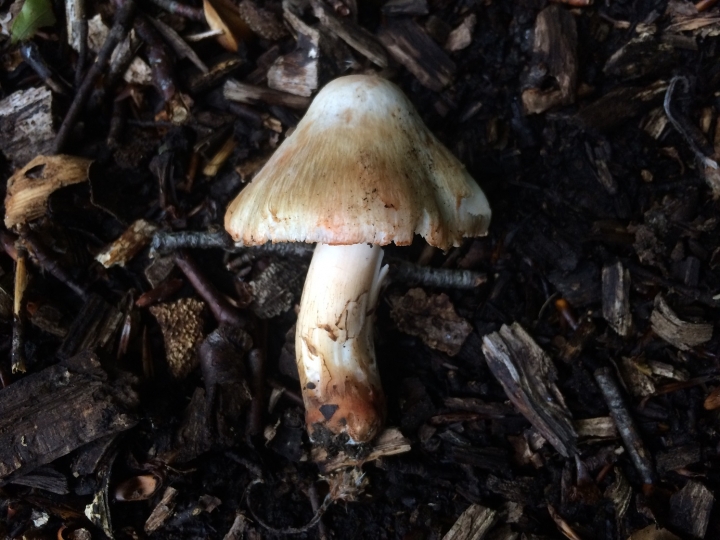 The Deadly Fibrecap is a very poisonous mushroom containing a lethal concentration of the toxin muscarine. This Summer season mushroom is notorious for staining bright red in all parts and it was once known as the Red Staining Inocybe. 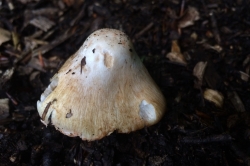 Ivory white or cream staining bright red or pinkish orange with age. Initially conical or bell shaped, then becoming flat with an umbo. With fine fibres that radiate from the center and often splitting at the edge of the cap. 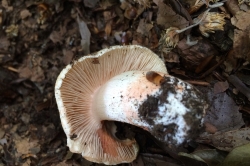 Starting with a cream colour and becoming pale cigar brown with age. Slowly staining red where bruised. Crowded and attached to stem. 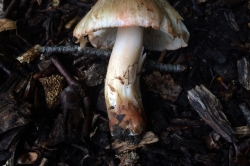 White and slowly staining vivid red where touched or bruised. Stout and fibrous. The base is either not bulbous at all or only very slightly swollen. 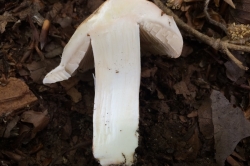 White not changing colour when cut, but later slowly reddening. It can often be found already stained red where eaten by slugs. 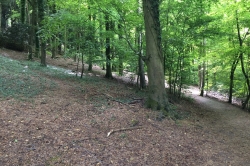 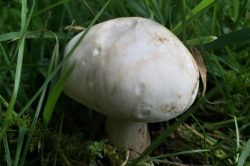 Since it appears at the end of Spring and early Summer it may be confused with a late flushing St George’s Mushroom (pictured left). However the St. George’s Mushroom doesn’t stain red, its cap doesn’t have radial fibres, its spores are whitish cream and its smell is distinctive.

There are many other species of red staining Fibrecaps that may look very similar but appearing in Autumn. Since all Fibrecaps are suspected of being very poisonous all should be avoided by the forager. Identifying the different species of Fibrecaps (Inocybe spp., Inosperma spp., Mallocybe spp., Pseudosperma spp.) with precision is often a task for the mycologist well equipped with a microscope.

The smell is strong and pungent but hard to describe. It is sometimes compared to honey, fruit or perfumed soap.
The flesh is said to taste sweet but we don’t recommend tasting this mushroom due to its toxicity.

Common in Southern England where suitable habitat (woodland on chalky soil) occurs, reappearing every year in the same woodland. Rare in other parts of the country.

The Deadly Fibrecap is considered the most toxic of all Fibrecaps, but all species of this genus are suspected of being poisonous and should all be avoided. The Fibrecaps are identified by the radial fibres in the cap, the fibrous stem and the dull brown spore print. Most are little brown mushrooms and quickly dismissed by foragers.

The toxin found in these mushrooms is muscarine which causes gastric upsets, excessive sweating and salivation, slower heart rate and can lead to death. The Deadly Fibrecap is known for containing a deadly amount of muscarine and deaths associated to this mushroom have occurred in the UK and Continental Europe in the past century. The antidote for muscarine poisoning is atropine, a substance better known for being the main toxin in the Deadly Nightshade plant. Those who have been poisoned by the mushroom should never attempt to use the plant as an antidote as atropine can be deadly itself and administration of medicinal dosage should only be done by a qualified professional.