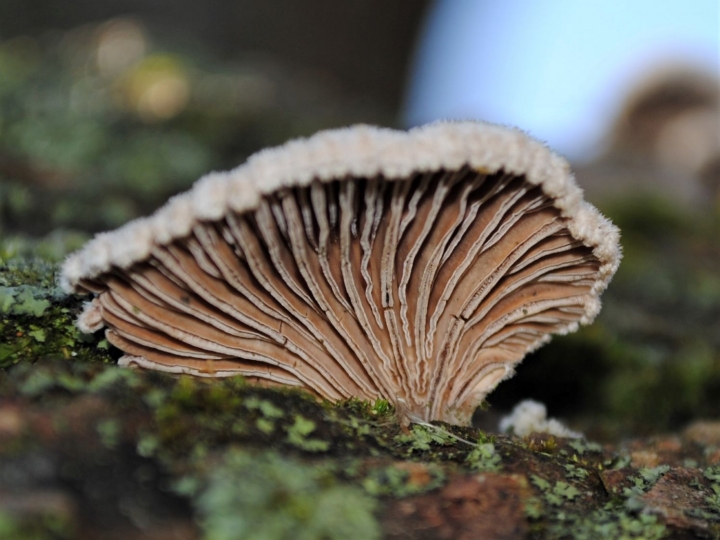 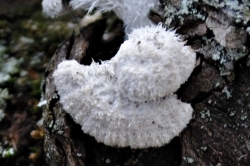 1–3(5) cm across, fan-shaped, soft when young, turns leathery with age. Upper surface is white or off-white, sometimes with pink tinge, often covered with algae (which makes it green), and it is extremely hairy. It attached to the host/substrate in one point. 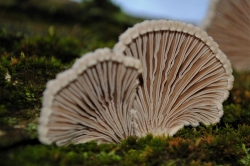 They are rather delicate pseudo gills or ridges, not real gills, radially growing from the attachment point to the host/substrate, often branched towards the margin of the fruit body. The species got its scientific and common English names because these pseudo gills are split lengthwise.

Thin, soft and rubbery-flexible when young, became tough and leathery with age. 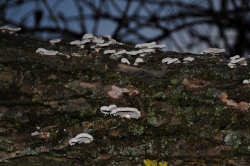 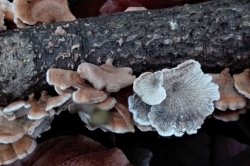 It can be confused with Crimped Gill (Plicaturopsis crispa), which also has pseudo gills or ridges, but they aren’t split, and its cap is smooth and zonated.

Occasional and widespread in the UK. One of the most common macrofungal species globally and only absent in Antarctica.

Spore print is white. Spores are clear or colourless (hyalin), smooth and sub-cylindric.

It is a known human pathogen too, but extremely rarely causes any troubles. Its mycelium was found in several parts of the human body, but we have less than a hundred cases worldwide since it was first discovered in late 80s. As it seems, it is not only affecting immunocompromised patients.

Also, it is one of the few medicinal mushrooms which after it went through the whole clinical spectrum of tests and trials ended up as a prescribed medicine in Southeast Asia. It was discontinued about a decade ago. You can read more about it here.