The Golden Scalycaps are very noticeable mushrooms with their golden yellow colours. They are fairly common growing in tufts on live and felled trees. Accurate identification to species is difficult and their edibility is largely disputed, so we can’t recommend them. 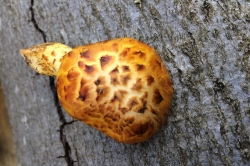 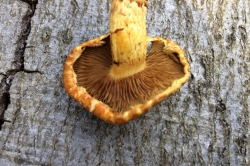 Starting pale yellow, becoming pale brown and then rusty brown. The gills are crowded and adnate (attached to the stem) although often with a sinuous notch before joining the stem. 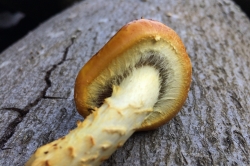 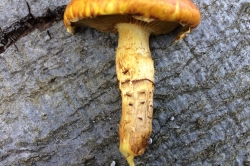 Yellow to orange yellow covered in thin scales from the base up to a faint ring zone. 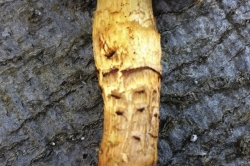 No membranous skirt, in younger specimens a faint ring zone can be observed in the stem. 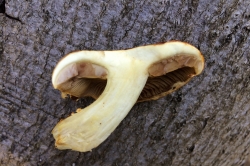 Firm, pale yellow throughout. A bright yellow or rust staining can occur at the base of the stem. 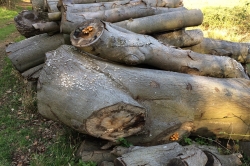 Grows in tufts from the wood of trees, both dead and alive. It has a strong preference for beech. 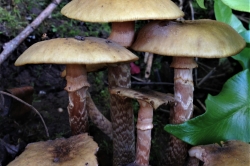 Beginners could mistake a Scalycap for Honey Fungus (Armillaria mellea), pictured, but the cap, stem and skirt are different.

The Shaggy Scalycap (Pholiota squarrosa) is the most common and well known of the Scalycaps but it’s distinguished by a dry (not slimy) cap covered in shaggy upturned scales. This species is reported as toxic specially when consumed with alcohol.

There are a number of other Scalycap species with a slimy cap that can be difficult to distinguish, see “Other Facts” below for more info.

Mild, mushroomy and even slightly sweet.
We found no bitterness during our nibbling test.
This mushroom is not considered edible, we have not tried eating it and can’t recommended it for the pot.

The Golden Scalycap is known to most seasoned mushroom hunters under the familiar name Pholiota aurivella. However recent studies by mycologists point that a number of similar species have been mislabeled with this name. This group remains unresolved and accurate distinction is difficult without using a microscope. Below are our findings according to more recently published guides, but things are still likely to change:

Pholiota adiposa has been reported as edible by some and in particular from China, however it is difficult to confirm if this refers to the same species, and some Scalycaps are reported as poisonous, so we can’t recommend anyone to try.