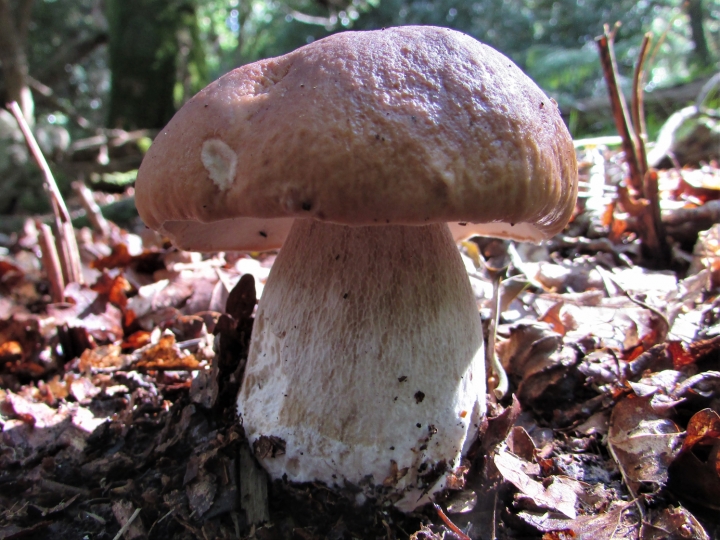 One of the stars of the mushroom world. Easily recognisable among the edible species. Generally seen eight days after rain around late summer to the start of autumn. 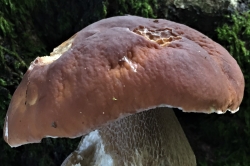 White when very young, maturing to look like a crusty brown roll, hence the name penny bun. The edge of the cap is often white. Bulbous while young with the underside flattening when mature, brown to reddish brown. Slug marks expose white flesh. 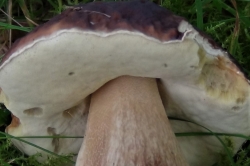 Has very small white pores which can yellow a bit with age. 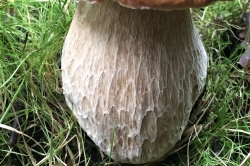 Thick, bulbous and white ageing to slightly tan yellow. The stem has a fine net like covering just under the cap and sometimes extending all the way down the stem, solid when young, fresh or free from maggots. 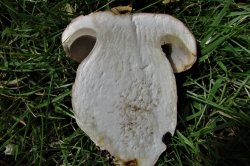 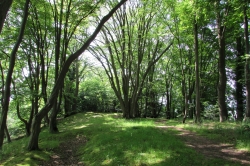 Mixed woodland but found more with beech, oak or pine. 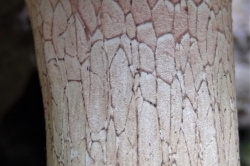 No poisonous mushrooms look similar, all the poisonous Boletus such as the Satans Boletus are either very red in the flesh or sponge, or stain blue immediately on cutting.
You could potentially confuse this mushroom with the Bitter Bolete, Tylopilus felleus which although not poisonous will ruin any meal you are unfortunate enough to add this mushroom to. A little nibble of the mushroom when raw will soon identify it with the Penny Bun being delicious and the Bitter Bolete being as bitter as sin! A better way to distinguish the two is that the Penny Bun has a lighter net like mesh on a slightly darker stem, the Bitter Bolete has a darker mesh on a lighter stem, pictured.
The Summer Bolete, Boletus reticulatus, looks very similar but has a slightly darker stem, not as solid flesh, lacks the white cap edge and grows in early Summer.

Excellent raw or fried in butter when fresh. Very mushroomy, one of the best species to dry where the mushroom flavour is enhanced.

Fairly common if you know where to look.

Penny buns produce more glutamates when dried so enhancing the flavour.
Tests on dried Penny Buns found that there were many different Boletes in a packet as they are hard to visually identify when dried.

Due to circumstances beyond our control we are unable to fulfil shop orders temporarily. We will be able to take orders for post again very soon. Dismiss