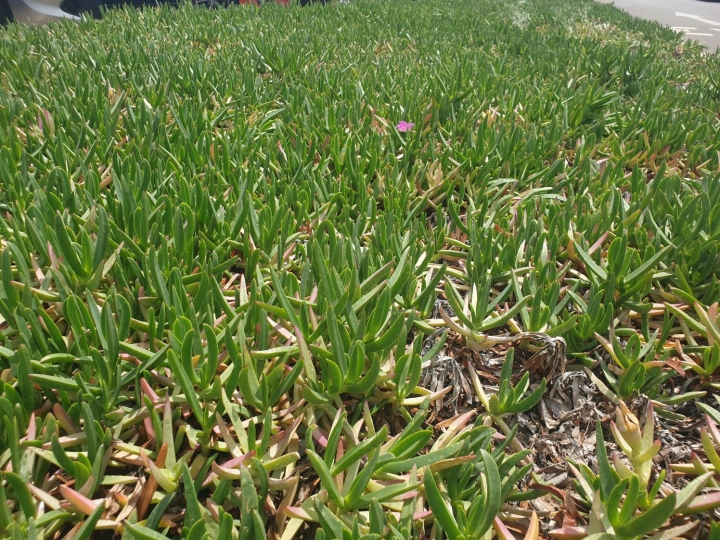 These plants are a non-native from the southern hemisphere, South Africa, Australia and Chile. The genus Carpobrutus contains a number of very closely related and hard to separate species and varieties, the best known of which is the sour fig or ice plant. Other names include sea fig and sally-my-handsome. They all live in seaside locations. It is likely they hybridise and so it is a good thing that they are all equally edible, particularly the fruits and the succulent leaves. All are low growing mat forming succulents sometimes covering extensive areas. 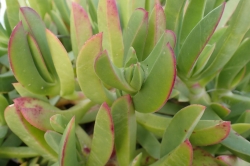 The leaves are like most succulents, not thin and papery but fat and 3 dimensional with a waxy outside. They are generally triangular in section and elongated, 5 – 10cm long. They may be pea pod like or fatter at the tip resembling a scimitar. They a green but may have pinky red edges. 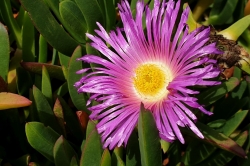 The flowers are daisy like, and yellow, purple, or pinky purple, from 4 to 15cm. 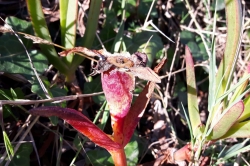 The fruit start as a thickening cup like structure (calyx) underneath the flower. Green at the start they turn red as they mature. They are mostly triangular to cylindrical in section, elongate to equidimensional. 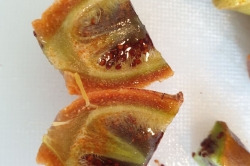 Many small seeds similar to a fig. 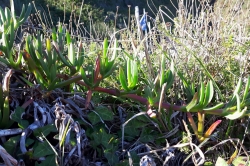 The stems are mostly horizontal and spreading in a tangled mass, 1 to 2cm thick, becoming more upright with the flowers. 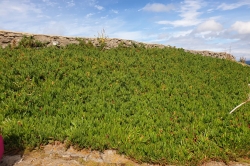 The sour fig (Carpobrutus edulis) has a number of varieties and there are a number of other very similar species leading to extensive misidentification including the sea fig (C chilensis) and the Sally-my-handsome (C acinaciformis). This is not helped by their ability to interbreed and produce hybrids. The sea fig has purple flowers with yellow centres – and these are 4-6cm wide. The sour fig has pale yellow flowers that are 6-15cm wide. Add in to that a number of varieties and species with slightly different leaves and shades of flowers with mixes of yellow and purple and they become hard to separate. However all are edible and the fruit and leaves can be used in the same way.

No toxic plants are likely to be confused with the Sour fig family.

The fruit vary between sweet and sour, and salty.

The mature red fruit are the best part of the plant and have been used by the indigenous people wherever it occurs. Great for jams but can be eaten raw. The succulent leaves can be cooked or used as a salad but are somewhat astringent.

The leaves and their extracts have been used to treat various ailments such as coughs, insects bites and jellyfish stings.

Although originally a southern hemisphere plant native to South Africa, Australia, and South America, this genus has become established in many seashore locations around the world wherever there is a mild climate including the Mediterranean and UK. It was useful for stabilising loose sea facing soils however it is now a pest with its spreading habit and ability to monopolise habitats to the exclusion of all other species. In the UK it is common in Devon and Cornwall, Pembrokeshire, Anglesey, and some part of Suffolk.

Our Sour Fig jam recipe can be found at;
www.wildfooduk.com/wild-food-recipes/sour-fig-jam/